Why Bitcoin Has The Momentum To Run Beyond 23,000

The price of Bitcoin keeps smashing resistance levels while reclaiming previously lost territory. Unlike other rallies into the current area, this price action might suggest a persistent trend and a new dawn for the industry following months of collapsing companies and bankruptcies.

As of this writing, Bitcoin (BTC) trades at $22,800 with sideways movement in the last 24 hours. In the previous week, the cryptocurrency records a 10% profit. Other cryptocurrencies in the top 10 by market capitalization are experiencing similar price action with substantial profits over this period.

Is Bitcoin Finally At Bottom Levels?

According to an analyst at Jarvis Labs, the current Bitcoin rally results from a long period of consolidation below the 200-Day Moving Average (MA). This moving average is one of BTC’s most important levels operating as critical support during the bearish cycles.

As Bitcoin reclaims the 200-day MA at around $19,520, the analyst wants to see a consolidation above this level. The rally might extend if the cryptocurrency can hold above it, pushing BTC into further highs, solidifying “a flip of the 200-day MA from resistance to support.”

As seen in the chart below, during the 2019 bear market, BTC saw a long consolidation below its 200-day MA before reclaiming these levels later in the year. According to the analyst, the longer the consolidation, the better the improvement for BTC’s overall market structure as other moving averages rise. The above does not imply that Bitcoin will continuously trend to the upside, back to its all-time high of $69,000. Instead, it suggests that BTC’s market health is improving, with the foundation for further gains increasing.

(…) And while there is still a reasonably high probability that early January price levels will be revisited again at some point in 2023, there is also a strong piece of data which suggests any such retest would present a prime buying opportunity.

In addition to this period of consolidation below the 200-day MA, which hints at a 2019-like bottom, BTC has seen “persistent accumulation.” The image below shows that Bitcoin investors have been “moderately accumulating” (Blue dots in the chart below) more of the cryptocurrency.

Similar to the 2018-2019 bear market, this accumulation period preceded market rallies. In the coming months, Bitcoin should see more aggressive accumulation (Red dots in the chart below) to support another bullish season. 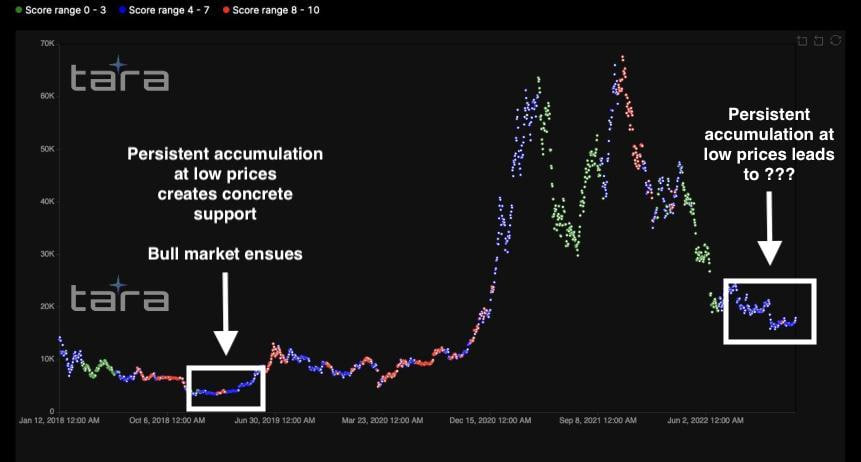 The US Federal Reserve (Fed) remains the biggest obstacle to a Bitcoin rally. The financial institution is hiking interest rates to reduce inflation while hurting financial markets.

Market participants expect the Fed to pivot its monetary policy, but gains in stocks and crypto, combined with sticky inflation, could trigger the opposite. If this happens, optimistic investors might see the buying opportunity presented by the Jarvis Labs analyst.

Source and More information: Why Bitcoin Has The Momentum To Run Beyond 23,000