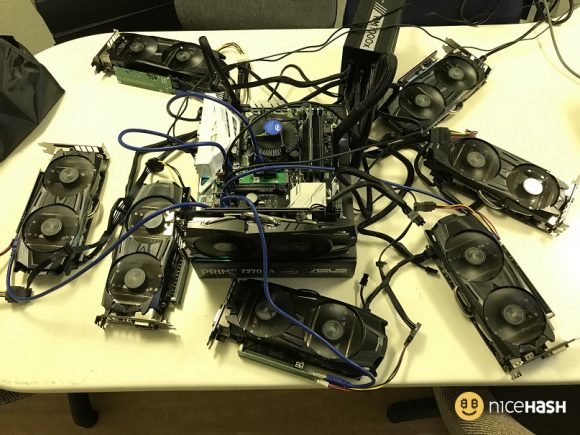 NiceHash have published some interesting experiments they have done recently, building an 8x GPU mining rig using the Asus PRIME Z270-A motherboard. This motherboard has 7 PCI-E slots as well as two M.2 SSD slots and they have utilized the 7 available PCI-E slots and one of the M.2 slots with an adapter to get 8 video cards working. Their experiment was with 8x Nvidia GeForce GTX 1060 on that particular motherboard from Asus, though other cards will most likely work as well just fine. With the recent price spike and unavailability of cheaper 6x GPU motherboards for mining people are already looking into more expensive alternatives that work well for six or even more GPUs like this model from Asus for example.

It is interesting to note that one of the M.2 slots was turned into the PCI-E slot by using cheap M.2 to the PCI-Express adapter that can be purchased from Chinese sellers on Ebay pretty cheap. You should however be careful if/when using such adapters as sometimes on some motherboards the M.2 slots are shared with some of the PCI-E slots on the motherboard. The Asus PRIME Z270-A motherboard apparently can be upgraded to 8 GPUs using this method, or you can just use the 7 available PCI-Express slots for a seven GPU mining rig instead of the more traditional 6x GPU configuration. The only drawback, the Asus PRIME Z270-A are not the cheapest out there as they use the Z270 chipset and you additionally increase the cost for the M.2 to PCI-E adapter, but then again you also get to connect up to 8 GPUs to a single mining rig (if your PSU(s) can handle that).