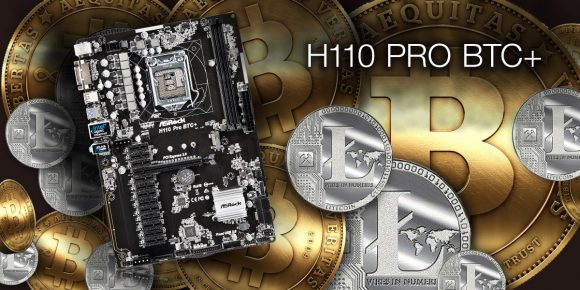 If you thought AsRock is getting behind in the game lately as far as GPU crypto mining motherboards go, well thing again… even though they haven’t had a new Pro BTC motherboard since the H81 Pro BTC they are not sleeping apparently and the recent shortages of that particular and popular model. At Computex 2017 the company has showcased an upcoming product that has caught the attention of the mining community, a motherboard with 13 PCI-Express slots for up to 13 video cards, connected via PCI-E extenders of course as the slots are pretty tightly fitted on the motherboard to retain a standard size.

The new motherboard is called Asrock H110 Pro BTC+ and is soon-to-be-launched (no exact launch date given yet)… it even has an M.2 slot onboard, though 14th card via M.2 to PCIe might be a bit too much to expect to work, but who knows. Other than the new chipset and the staggering 13 PCIe slots, the new motherboard seems to follow the design of the previous generation of Pro BTC boards, simplistic and cost effective. Of course the H110 chipset means that you would need to go to the newer Socket 1151 CPUs such as the Intel G3900 series of processors as well as the newer DDR4 memory.

We’ll probably have to wait a bit more for additional details such as the full specifications, pricing as well as release date and availability. You can expect the demand to be pretty high though, even considering that the demonstrated solution during Computex in Taipei, Taiwan apparently used Windows and had only 8 GPUs running (based on the available information), but all 13 should be available for use when the new motherboard hits the market hopefully soon (not yet sure if they will work under Windows though).