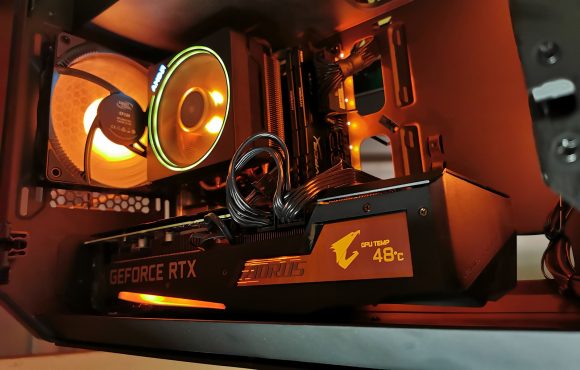 One of the most popular NVidia RTX 30 series of GPUS for mining crypto and more specifically for mining Ethereum (ETH) lately has been the RTX 3060 Ti, so no wonder these are hard to find as they are generally cheaper than RTX 3070, but have the same memory and performance for Ethash as the 70s. We’ve managed to get our hands on one Gigabyte AORUS GeForce RTX 3060 Ti MASTER (GV-N306TAORUS M-8GD) video card in order to play around with and share some interesting information, mining settings and performance results with anyone that might be interested.

The AORUS GeForce RTX 3060 Ti MASTER model from Gigabyte comes with a really huge cooler that has three fans with interesting overlapping design, plus it offers six video output connectors and one interesting feature – a user controllable LCD display on the side of the card. And as already mentioned, thanks to the 8GB GDDR6 memory with a 256-bit wide bus this RTX 3060 Ti should also be capable of delivering about 60 MH/s hashrate for mining Ethereum (ETH). The RTX 3060 Ti however has a more stripped-down graphics processor compared to the RTX 3070. While that shouldn’t be much of a problem for Ethereum mining, the video card however will be slower in more GPU-intensive algorithms compared to RTX 3070! 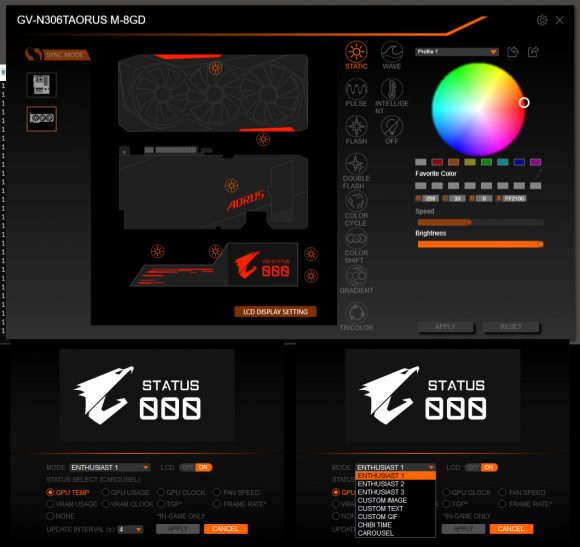 The user programmable LCD display on the side of the video card is controlled through Gigabyte’s RGBFusion 2.0 software that is also used for the addressable RGB operation for the motherboard RGB and fans connected to it. The software allows you to use the display to show things such as GPU Temp, GPU Usage, GPU Clock, Fan Speed, VRAM USAGE, VRAM CLOCK, TGP, FRAME-RATE and you can also put a custom image or animated GIF file to be shown on the display and some more. For a mining rig having a display that shows individual operational GPU temperature or FAN speed could be quite nice if you have the functionality already on the video card, no wonder the first thing with did with the LCD display was to set it to show the temperature of the GPU. 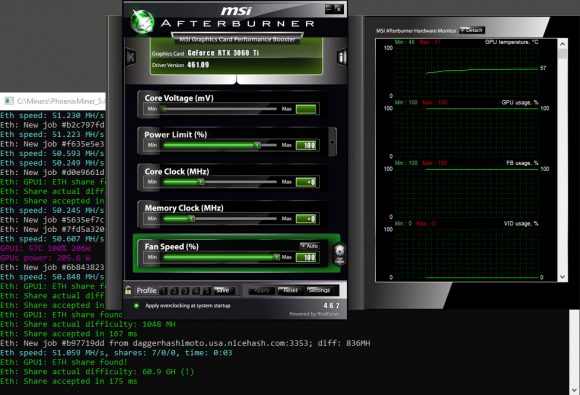 What about mining hashrate for this Gigabyte AORUS GeForce RTX 3060 Ti MASTER 8G video card? This particular model is with 240W TDP by default (the 100% setting in MSI Afterburner) and you can go down as low as 100W and as high as 270W (-58% to +13%) and it is also clocked higher. As a comparison the reference design RTX 3060 Ti from Nvidia has just 200W TDP, so 20% higher power usage by default for this Gigabyte card and we don’t need the extra power usage for ETH mining. Anyway, the out of the box performance this video card is delivering is around 51 MHS at stock settings, but why settle for it when you can easily push it to 60 MHS and even reduce the power consumption as we have already seen playing around with Palit GeForce RTX 3070 GameRock GPUs for mining Ethereum. 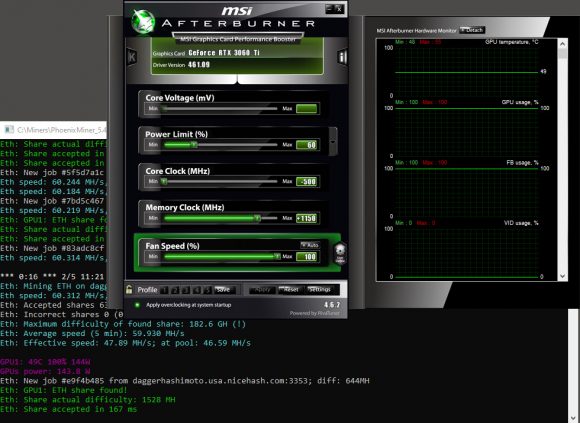 Starting to optimize settings for better performance and higher hashrate for Ethereum mining on the RTX 3060 Ti we went down to 60% TDP with reduced GPU clock (-500 MHs) and increased memory clock (+1150 MHz) in order to get the expected 60 MHS hashrate. With Palit’s RTX 3070s we’ve seen similar settings, though there the TDP was lower at 50% TDP for the same 60 MHS performance. Do note that we needed +1150 MHz for the video memory here, even though out sweet spot of 1100 MHz will do just fine for 60 MHS when using a mining rig as the test setup was with a single card and the display connected to it – this means higher power load and a bit of a performance drop. So, in a 6x GPU mining rig running the memory with +1100 MHz you should still be able to get 60 MH/s Ethash mining hashrate.

Here we tested with fans running at 100% due to the small mini-ITX case the GPU was running in and the not so good airflow, though you should easily be able to run the cooling fans lower with the GPU in a mining rig with good airflow and still get things running cool. The massive cooler and the three fans do great job in keeping everything cool, especially with the optimized settings for mining that put the power usage of the GPU down to just about 140W as reported by the miner compared to the stock TDP of 240W.