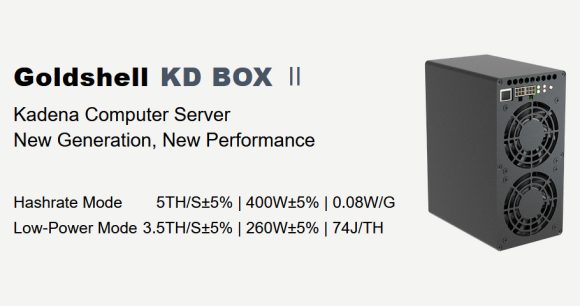 The ASIC manufacturer Goldshell has started selling an updated version of their smaller KD BOX PRO home-oriented ASIC miner for Kadena (KDA) dubbed Goldshell KD BOX II capable of up 5 TH/s hashrate with 400 Watts of power usage with a price of $325 USD (without shipping and customs expenses), starting to ship in mid-January from Asia. The new device comes in a similar small-scale form factor with increased performance and two 6-pin PCI-E power connectors instead of just one due to the increased power usage as well (still a bit on the edge for 24/7 400W power usage though in our opinion). Interestingly enough there is no WiFi capability, just Ethernet port and the wireless connectivity especially for home miners is a really useful feature that the previous PRO model did come with. Interestingly enough even with the higher power usage the new KD BOX II is still rated at the same noise level as the PRO version, we kind of expected to be noisier, and it actually could still be.

So, the new Goldshell KD BOX II comes in the same compact size case, weights the same, however is capable of increased performance compared to the older PRO model. It consumes more power, yet it should remain with the same low noise level that is very acceptable for home use – great for a heater/miner choice, or so the official specs claim. There are apparently two modes of operation (a single miner replacing the regular and Pro models in the previous generation?) resulting in 5 TH/s mining hashrate for KDA with 400 Watts of power usage or 3.5 TH/s at 260 Watts of power usage.

As a comparison the KD BOX PRO is rated for 2.6 TH/s at 230 Watts of power usage… that is just about 0.0885 Watts per Gigahash of hashrate. As a comparison the new KD BOX II does manage to offer 0.0743 Watts per Gigahash in low power mode when running at 3.5 TH/s or 0.08 Watts per Gihagash in full power 5TH/s hashrate mode. These numbers actually show that there is just about 10% improvement in power efficiency in the high-power mode when the new miner runs at full 5 TH/s hashrate, the lower power mode is better though.

What is our verdict for the Goldshell KD BOX II then? Considering the not that much of power efficiency improvement in the full power mode that will most likely also come with significant increase in noise level (the less than 35 Decibels is probably the rating in low power 3.5 TH/s mode we suspect) and the lack of WiFi capability it might not actually be that much better choice than the KD BOX PPRO model. The only advantage is the lower price and the fact that the older models are no longer available for sale from Goldshell. We kind of expected to see something like the difference between the KD BOX and the KD BOX PRO models where improvement was much more significant than what we are getting there between the KD BOX PRO and KD BOX II.