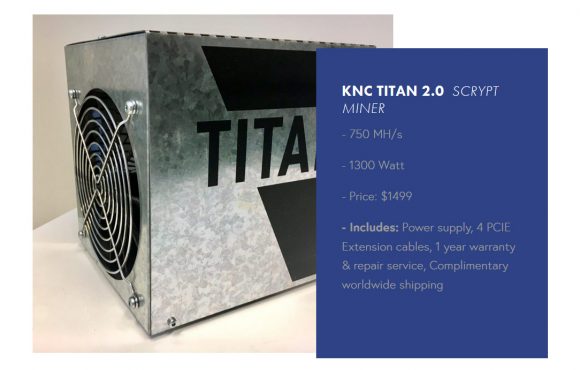 Last year, in May 2016, KNC Miner filed for bankruptcy prior to the last reward halving of Bitcoin and was then sold to a new company that had plans to relaunch. Well, it seems that the planned relaunch has happened and KNC Miner is back with the new ownership and a new mining ASIC for sale. KNC TITAN 2.0 is a new and improved version of the original Titan Scrypt ASIC miner, based on the same design and functionality as the older generation. The new KNC Titan 2,0 comes with 750 MHS Scrypt hashrate at 1300W power usage and the new owners of the company say they have resolved the issues and complaints users had with the previous generation hardware. The Titan 2.0 comes in a complete plug & play kit with a complimentary power supply, 4 PCIE extension cables, and a 1 year warranty and repair service at price of $1499 USD. 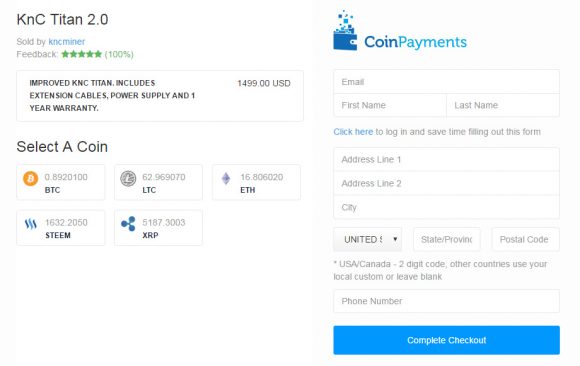 KNC is even throwing in a complimentary worldwide shipping to celebrate their re-launch. Payments are processed in crypto currencies via CoinPayments and you can use BTC, LTC, ETH, STEEM or XRP to pay for the Titan miner. The initial backs of Titan 2.0 Scrypt ASIC miners apparently consists of 3000 units out of which already almost 600 have been sold. Do note that this is a pre-order and Batch 1 is scheduled to start shipping in 08/2017. Interestingly enough the company is apparently planning to release another new miner soon, or so it is hinting at the moment.

It all seems pretty interesting a this point, especially with the recent price increase of Litecoin (LTC) and the deal that KNC has prepared for their new ASIC miner. The company however has to earn back the trust of miners as with the previous ownership it has lost it badly with all sort of issues. Hopefully the new ownership won’t repeat the same mistakes as delays of orders, users getting damaged or defective hardware, miners not working properly or as advertised initially or even dropping all sales of hardware and focusing on building their own mining facility on the backs of the users that supported the company by buying their hardware in the first place. Guess we’ll have to wait and see how things develop from now on with the new KNC Miner being on the mining market again…