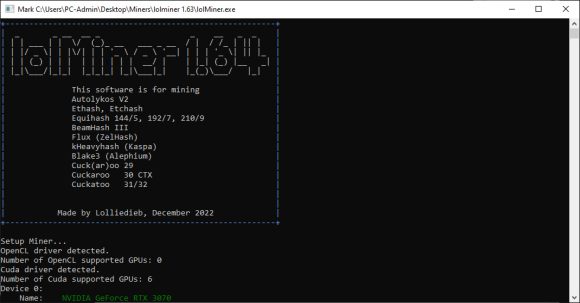 The just updated lolMiner 1.64 is a dream come true (more performance with less power used) for everyone that is currently mining Kaspa (KAS) with their Nvidia GPUs, not only because of the further improved performance that the update brings but also because of the new features it gives access to the miner for optimizing their GPUs. We did a quick test and the results are great and you should head on to your mining rigs and update and start tweaking the miners some more for additional hashrate and even lower power usage, so a win-win situation for sure.

According to the author of the miner the new version brings about 8-8.5% on Nvidia Pascal GPUs, 4.5-5% on Nvidia Turing and Ampere GPUs and 3-4% on AMD Navi and Big Navi GPUs in terms of improved performance. And thanks to the addition of the extra tweaking features and most notably the Core Offset (--coff parameter) we can not only get a boost in the performance with the same settings we were mining with version 1.63, but also get it with reduced power by just adding the extra option with a value between 250 and 350 (depending on how much your GPUs can handle stable). The --no-oc-reset might also be helpful if you do not wish to reset the settings you have applied to the GPUs when the miner is stopped.

The new beta options may require a video driver update, depending on how old Nvidia video driver you are using. The description says you need version 520 or higher, though we have them working successfully on older 512 driver, but you should probably just update if using older drivers anyway. The other new command line options added for the miner might also help to further optimize things a bit more, though they will require additional tweaking.

Changes
– Improved Kaspa only mining performance. Speed increase is about 8-8.5% on Nvidia Pascal GPUs, 4.5-5% on Nvidia Turing and Ampere GPUs and 3-4% on AMD Navi and Big Navi GPUs
– Beta feature: added options to set core clock offset (--coff), memory clock offset (--moff), power limit (--pl) and a fixed fan speed (--fan) on common Nvidia GPUs. Required are admin privileges and Nvidia drivers 520 or higher!
– The syntax is the same as with --cclk and --mclk – if a single value is given then it will be applied to all compatible GPUs, else a coma separated list of values can be given using a * character to skip over GPUs. (1)
– Added a new parameter --no-oc-reset to turn off the reset of overclock settings when ending the miner.
– Windows: Added a beta gui to generate overclock settings strings / .bat files for the miner. Also the tool can apply the chosen settings directly.

(1) Note: No responsibility taken for the values set. Please use with care. If your mining os had build in functions to set these settings we recommend using them instead of the miner settings.

Fixes
– Fixing a bug with ETHV1 (nicehash) stratum mode that may cause the worker name to be appended twice when it was given by –user . (the use of –worker did not have this issue). 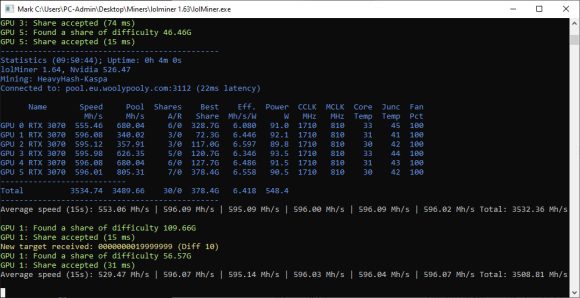 Here is an example you can use for RTX 3070, just replace YOUR_KAS_WALLET with your actual wallet:

You can try to play around with the core offset setting, though 250 to 350 MHz should be safe for most GPUs, some may require lower setting to function stable or can take up higher offset for even greater power savings. As for the memory clocks and settings with example command lines, you can take a look at the post where we talk about Optimizing Nvidia GPUs for Performance with Lower Power Usage for Kaspa (KAS) Mining. Just use these examples for the specific GPUs discussed there and add the Clock Offset parameter to them as a good starting point and see how your power usage drops while you get extra hashrate after the update.

– To download and try the latest release of the lolMiner 1.64 mining software…