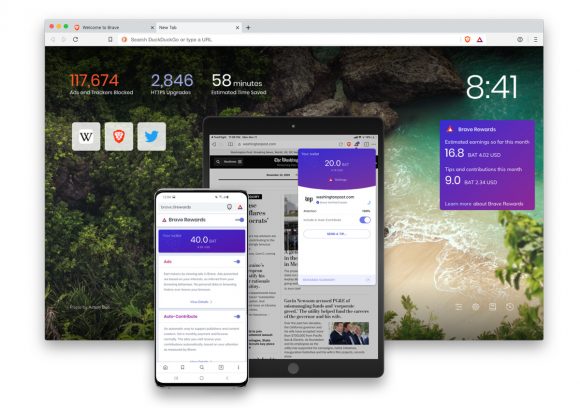 Today Brave Software, makers of the innovative Brave browser which combines privacy with a blockchain-based digital advertising platform, announced the official launch of their Brave 1.0. The Brave open source browser, based on Chromium, intends to fundamentally shift how users, publishers, and advertisers interact online by giving users a private, safer, and faster browsing experience. At the same time also funding the Web through a new attention-based platform of privacy-preserving advertisements and rewards based on the BAT crypto tokens. In addition to desktop and Android devices, Brave’s private ads and payment platform (Brave Rewards) is now also available for iPhones and iPads. Brave is available for download for Windows, macOS, Linux, Android, and iOS, in 52 different languages.

The Brave browser was previously in beta release and already has 8.7 million monthly active users across the globe according to the company. As data privacy and security issues take center stage around the world, users turn to Brave for its privacy-first approach that natively blocks trackers, invasive ads, and device fingerprinting – leading to substantial improvements in speed, privacy, security, performance, and battery life on mobile devices. Default Brave Browser settings block phishing, malware, and malvertising. Embedded plugins, which have proven to be an ongoing security risk, are disabled by default. Browsing data always stays private and on the user’s device, which means Brave should never see or store the data on its servers or sell user data to third-parties. 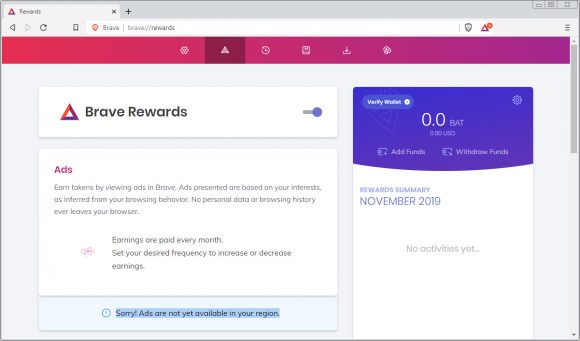 If all of he above sounds great to you and you have not heard about the Brave browser or used it yet, then you might want to give it a try as the above claims are pretty much true, though unfortunately still somewhat limited to only some users and not really accessible to everyone. The idea about the Brave browser is indeed a nice one and can be really useful, that is precisely why we have been using it for quite some time now and trying new features as they become available. The Crypto Mining Blog has been a verified Brave publisher for a while now and have covered the BAT tokens and the Brave Browser multiple times over the years, so we can talk based on our personal experience on all sides of usage.

The problems for Brave realizing their ideals all started with the Basic Attention Token (BAT) sale that ended in a breeze with most tokens ended up being acquired by a very small number of users, instead of getting wide user distribution right from the start and incentivizing users to actually use these tokens as they are intended. There was big interest initially in the token as back when it was released it was the token sale paradise time and everyone wanted to make quick money out of tokens and did not think about future use. The fact that Brave already had a working product, although in beta, and a solid and big plan for the future for their BAT tokens really made them attractive. Centralization of tokens in the hands of few however has seriously hurt these plans and initial token usage for supporting content creators did not go that well as people trying the Brave beta browser had to purchase some tokens in order to even just try the feature.

Things got a bit better when Brave started some BAT giveaways to users in order for them to actually be able to try spending them by supporting websites they like as alternative to seeing ads, people actually started supporting Brave Publishers for a while. So the idea was working as intended for a while, BAT tokens became a new way of supporting content creators and not having to realy on ads… well, not really as the tips we got from users were equal to just a few bucks a month. Still better than nothing, but that did not continue for too long with BAT giveaways stopping, the actual usage of the token has pretty much stopped… we have not received a BAT tip for over a year. Brave claims that they have over 300,000 verified websites, including The Washington Post, The Guardian, and Wikipedia… they may be still get some occasional tips from users as they are much larger than our small crypto blog, but we still doubt that even they make a lot from Brave Rewards.

Another much anticipated feature was the Brave Ads, launched earlier this year in beta. Brave Ads are being shown to users instead of regular website ads (users receive 70% of the revenue share in BAT), but unlike normal ads these compensate users for their attention by rewarding them with BAT. So another way to earn Basic Attention Tokens that can later on be either cashed out, held for the future or spent for supporting content creators, however not available worldwide… even with the 1.0 release still limited to just a small percentage of users around the world. To date, according to the company the Brave Ads has delivered nearly 475 privacy-preserving ad campaigns, sparking 130 million ad confirmation events, from brands such as Intel, Pizza Hut, Home Chef, and more which may be great if you live in USA, but what about the rest of the world?

We can also talk about the Uphold BAT wallet integration and so on, but there is no need for now. So, good job Brave with going out of beta and releasing version 1.0, but there is much more to be done before your browser becomes something new and really disrupting things as they are currently. Similar level of privacy can be achieved with other alternative browsers that have been available for some time already with the help of plugins or add-ons or even built-in features of more privacy oriented browsers. The game-changer features are the Basic Attention Token and its use cases – Brave Rewards and Brave Ads and they still seem to be far from working or being used by the average user. We hope that will change in the near future, but for now… well there is still much more to be desired.

– To give the new Brave Browser 1.0 a try and see if it really changes the way you browse the web…