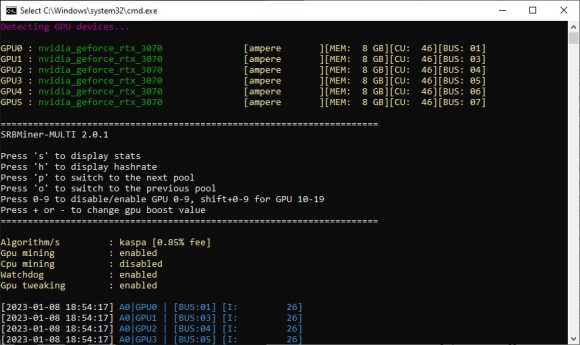 With its major release version 2 the popular AMD GPU miner SRBMiner-MULTI has introduced support for Nvidia GPUs as well, so now you can mine some of the latest algorithms getting introduced to the miner not only with AMD-based video cards but with Nvidia video cards as well. The miner supports setting GPU clock (--gpu-cclock) and memory clock (--gpu-mclock) on Nvidia GPUs as well as power limit (--gpu-plimit) via command line parameters. There is not yet support for GPU clock offset in order to fully optimize power usage for mining GPU-intensive crypto coins that can benefit from lower power mining, but hopefully that feature will also be introduced soon.

SRBMiner-MULTI also does support dual-mining for Ethash/Etchash or Autolykos2 memory intensive algorithms along with GPU-intensive algorithms such as Kaspa’s kHeavyHash algorithm… single mining for KAS is also supported of course. So, if you were not paying an attention to the miner as it was AMD-only, now you don’t have a reason to ignore it anymore if you do own Nvidia GPUs. Performance wise however KAS mining on Nvidia is lagging behind other better performing miners such as lolMiner or GMiner – around 520 MH/s on RTX 3070 for SRBMiner-MULTI compared to about 600 MH/s with lolMiner and GMiner with the same settings. Other algorithms might be able to perform better though, so you might want to check and confirm. We still haven’t had the chance to test and compare performance of the SRBMiner-MULTI on Nvidia GPUs on most algorithms and since support is brand new it might take a bit of time to be further optimized.