A bad day for Bitcoin usually spells a nightmare for the rest of the cryptocurrencies. That appears to be exactly what is happening this Thursday on crypto markets as BTC falls to four figures while altcoins get absolutely annihilated.

This time yesterday total crypto market capitalization was over $280 billion. Less than 24 hours later it has crashed to around $250 billion as a whopping $28 billion exits stage left. In what has been one of the largest overnight routs this year, markets have been left battered and bruised this morning and as usual the altcoins are bearing the brunt of the pain. 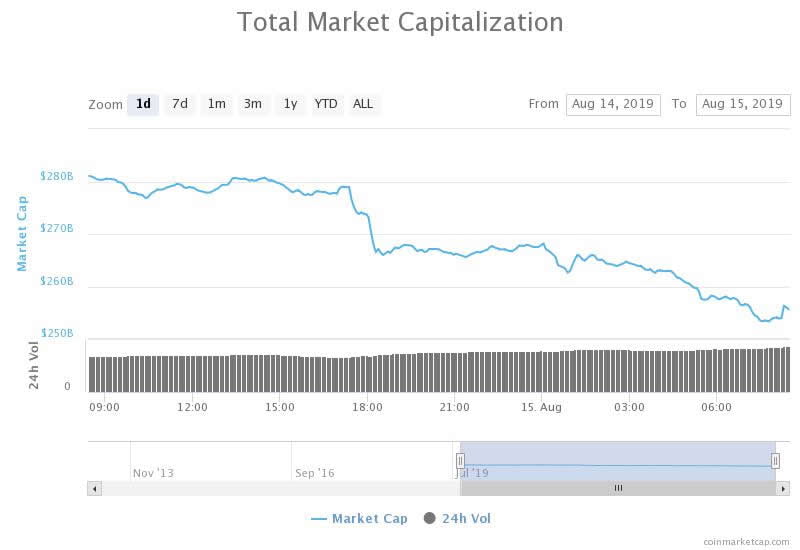 Altcoin trader Nik Patel has noted the correlation between alt markets and Bitcoin, which is still sitting at 69.5 percent dominance despite losing almost 10 percent itself according to Tradingview.

“Only twice out of the previous 8 occasions that ALT/BTC prices have fallen to 30 on 3-day RSI has it not been followed by a new all-time high (in other words, Bitcoin dominance has made new lows). We already got our fake-out between September 2018 – April 2019.”

– Only twice out of the previous 8 occasions that ALT/BTC prices have fallen to 30 on 3-day RSI has it not been followed by a new all-time high (in other words, Bitcoin dominance has made new lows).
– We already got our fake-out between September 2018 – April 2019. pic.twitter.com/uFMVPhjzvY

Ethereum has collapsed to its lowest level in three months. In a 14 percent slump, ETH plunged from just below $210 to dip below $180 during Asian trading today. The fall through the psychological support level at $200 has resulted in the world’s second largest crypto asset accelerating losses.

The picture is no prettier for Ripple’s XRP which has lost a similar amount in a slide back to $0.256, its lowest level in almost a year. The last time XRP was priced this low was in September 2018 before a huge spike up to $0.60. Such a bullish movement seems a long way away now.

The pain is palpable for the rest of the altcoins with Bitcoin Cash dumping almost 17 percent in a fall to $290. Litecoin is in even more grief as one of the year’s top performers gets battered, losing the majority of those gains in a slide back below $75. Since its 2019 peak, LTC has now lost almost 50 percent.

The normally immune Binance Coin has even dropped 7 percent as BNB retreats back to $27. EOS, which has had a terrible year so far has fallen to $3.57 as the Ethereum rival sheds 13 percent today. BSV has dumped 12 percent back below $130 and rounding out the top ten is Stellar sliding 9 percent.

The only altcoin in the green in the top one hundred at the time of writing is South Korea’s ICON which has gained 20 percent against the outflow of funds today.