Litecoin Price Could Rally 285% Pre-Halving Based On Historical Data

While the Bitcoin halving is not expected until March 13, 2024, according to Coinwarz data, Litecoin investors can already look forward to the traditionally bullish event as soon as this year. According to NiceHash’s estimate, the Litecoin halving will take place in 189 days, on July 19, 2023.

The approaching halving has prompted analyst Rekt Capital to examine Litecoin’s historical price trends before and after the halving in order to provide a prediction for the coming months.

After both halvings, however, the price gains were even stronger. As the chart below from Rekt Capital shows, Litecoin is up +14,200% after the first halving, and after the second halving, it was “still” 1,574%. From this, the analyst derives the historical tendency that LTC tends to rally stronger after the halving than before. 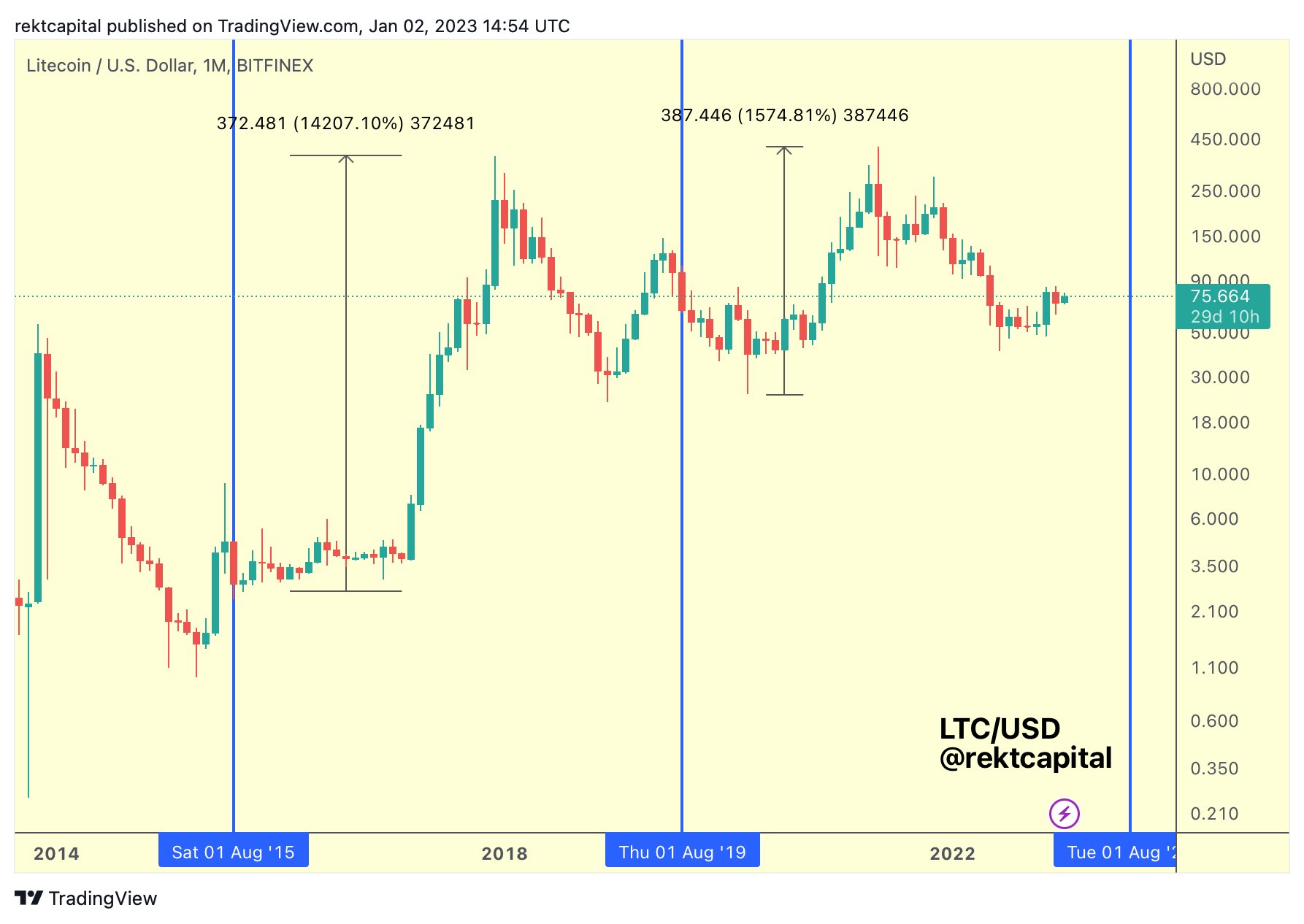 However, this does not mean that investing before the halving is not historically lucrative if you find the right time to place a sell order. According to the analyst, it can be seen from historical data that LTC sees a strong rally prior to the halving before the price drops sharply immediately.

The Litecoin price declined by -73% in the first 578 days after halving. The second halving led the price to drop as much as -83% before it found its bottom after 458 days. “For that reason it’s important to understand when an LTC pre-halving rally tends to top,” the analyst says.

As the chart below shows, LTC peaked 31 days before the event the first time and 61 days before the second occasion. Provided this trend continues, the LTC rally could stop as early as 92 days pre-halving – which would be in May 2023, according to Rekt Capital. 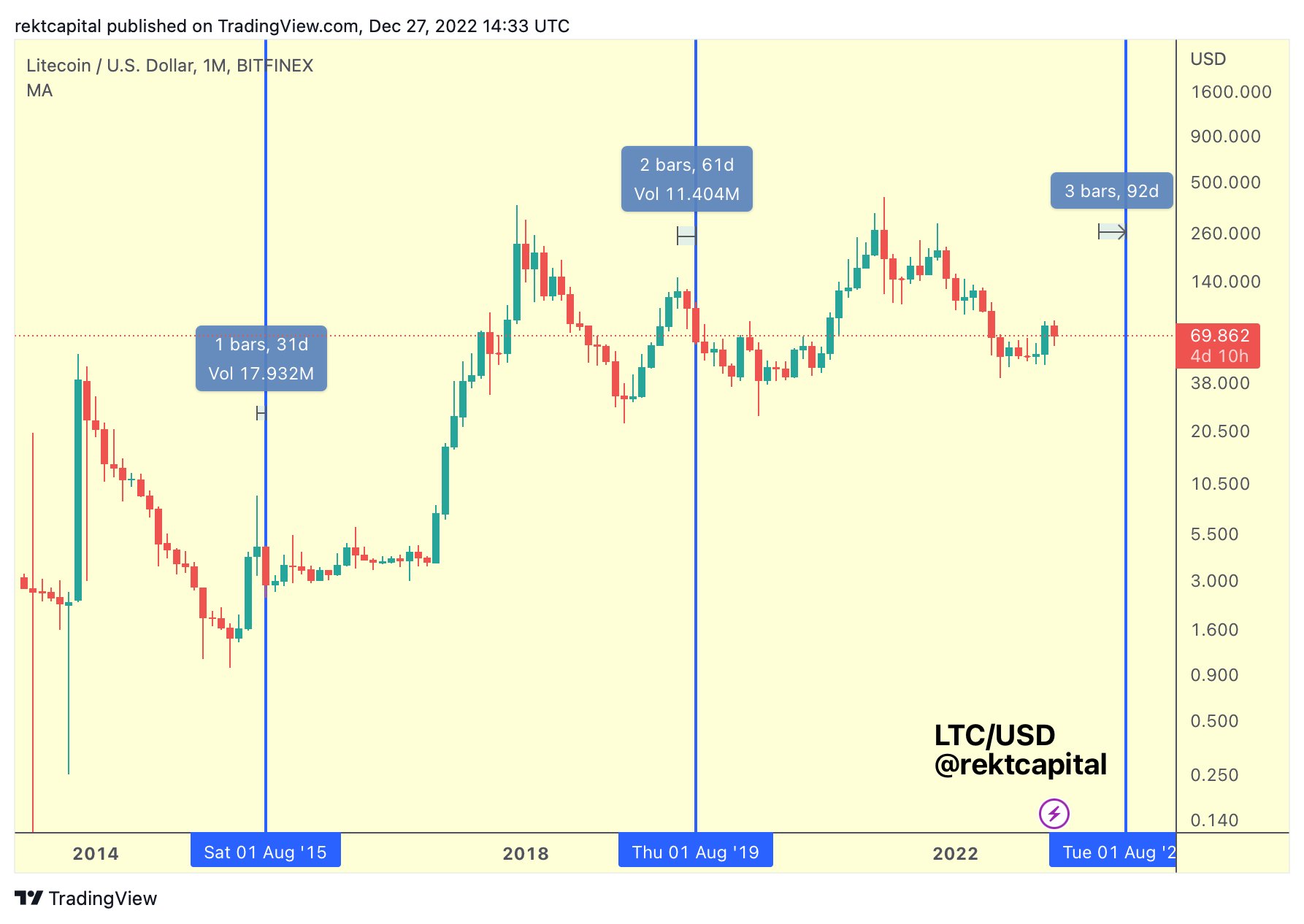 However, the rally could also end as early as April if the days double. It is therefore also interesting to scrutinize how long the rallies lasted in terms of time. The first LTC pre-halving rally lasted for just 90 days, while the second provided a good 180 days of excitement among investors. Therefore, the analyst concludes:

It looks like $LTC pre-halving rallies may be lengthening in time. If this upcoming LTC Pre-Halving rally lasts twice as long as the previous PH rally, then this rally will last ~365 days. Which finds confluence with a May 2023 top.

In terms of how much the LTC price could rise in the months leading up to halving, the analyst believes that the rally could propel the price as high as 285% from its bottom. Such a rally would mean that LTC has already captured certain pre-halving gains and could push up to the $115 zone.

This is also the point where the pre-halving 2019 rally peaked. LTC also briefly held support at this level after its 2021 bull market high to form the macro downtrend. 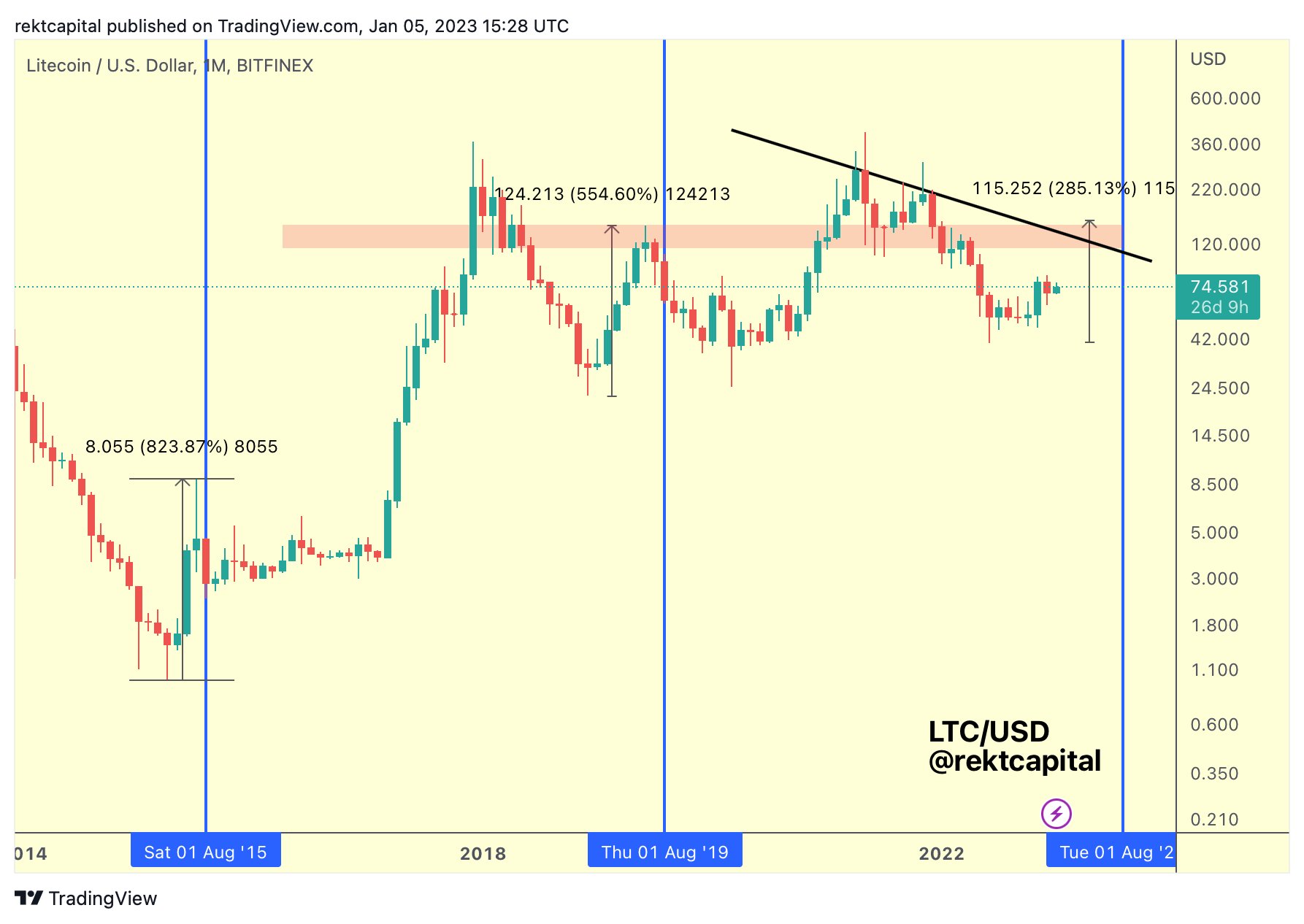 What Happens After The Halving?

Post-halving, LTC could face a strong retracement based on historical trends before an accumulation phase begins. The lows in both cases were higher lows compared to the pre-halving low. This could mean that LTC will fall between 72% and 77%.

The key is to “watch for deep post-halving retrace followed by long consolidation in an approx 70%-wide range,” the analyst explained. The breakout from the accumulation phase could occur after at least 400 days post-halving in July 2023, according to the (still short) history. In conclusion, Rekt Capital says:

This would coincide with a July 2024 LTC breakout. This would make sense as this #LTC breakout would occur after the 2024 Bitcoin Halving: It would also tie in with BTC’s general trend reversal which occurs in a typical Candle 4 in the four year cycle. 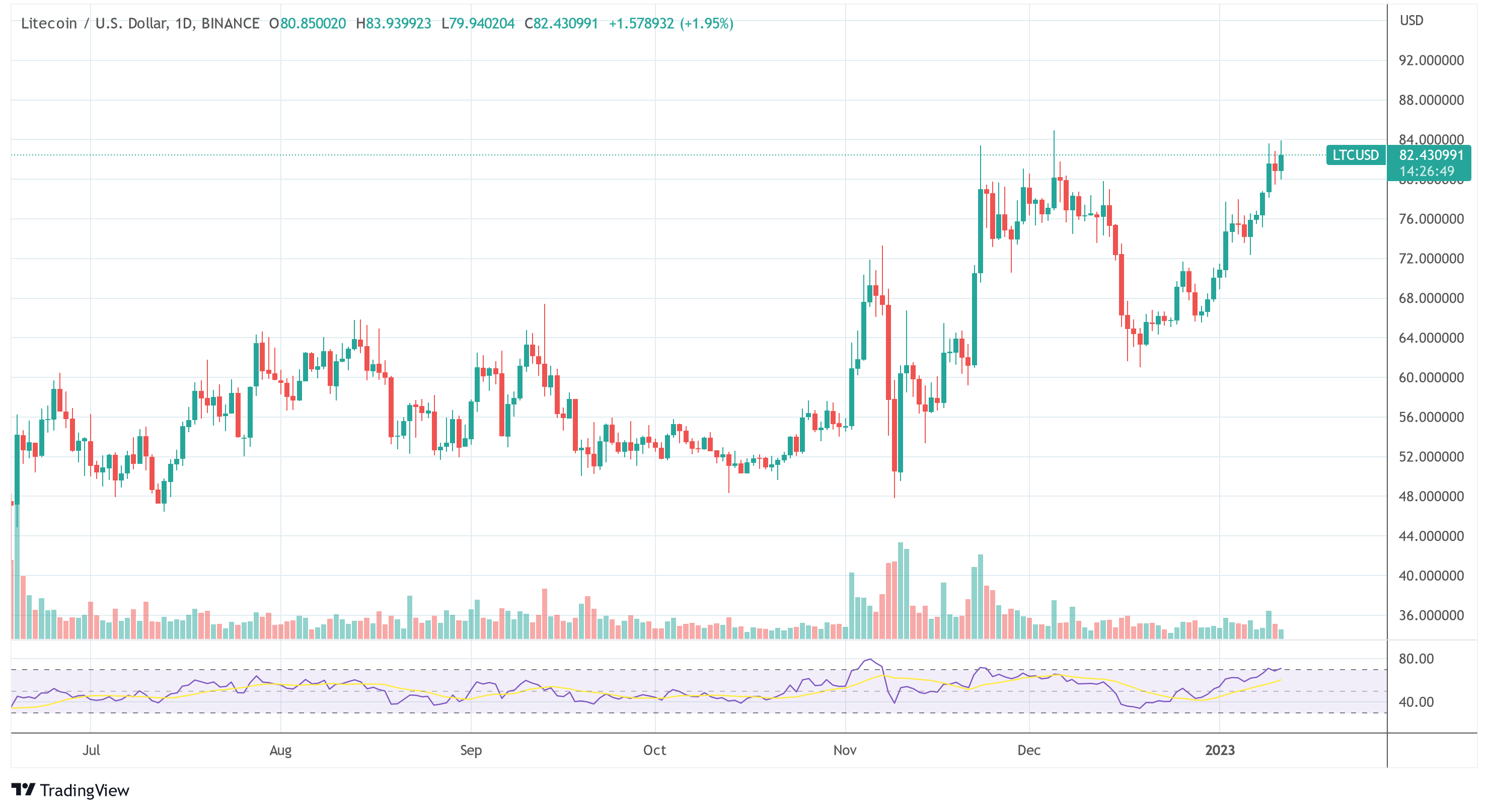 Source and More information: Litecoin Price Could Rally 285% Pre-Halving Based On Historical Data