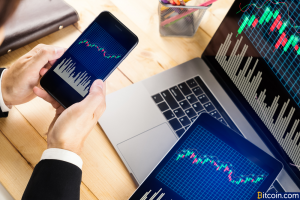 The price of bitcoin seems to have found some stability over the past 24 hours, after last week’s sharp upward climb in value followed by a 30 percent dip the next day. Since the drop, the price has bounced back and is hovering around US$2250-2300 per BTC at the time of writing.

Bullish Pressure Returns to Bitcoin Markets After a 30 Percent Dip

Last week was an exciting time for cryptocurrency traders as quite a few digital assets hit all-time price highs on May 24. Bitcoin’s value reached a high of $2760 across global exchanges which was followed by a short-term downtrend to the sub-$2000 mark. Quite a few traders had assumed a significant dip to the $1800-1600 range would take place, but so far these predictions never materialized. Since bitcoin ricocheted from its low, it has since consolidated between $2200-2300 over the past three days. For now, there is a touch of bullish pressure keeping the price going, but it’s significantly weaker than last week. Technical indicators still suggest a bear market could continue and what we see now may be an extended ‘dead cat bounce.’ Over the past couple months, we’ve reported that the 100 Simple Moving Average (SMA) was above the longer term 200 SMA in nearly every price analysis. However, things have changed as the 100 SMA is now below the 200 SMA indicating the downtrend may not be over.

Moreover, the Relative Strength Index (RSI) and Stochastic oscillators still show the price is overbought and bears may take the upper hand in the near future. Bitcoin’s price rebound was unexpected and has shifted traders predictions slightly, but a good majority are still assuming the uptick is merely a bull trap. If an upside breakout breaks the $2400 range, there’s a good chance we could skip the downturn and head towards all-time highs once again.

A Glimpse at Altcoin Markets

Alternative cryptocurrency markets have all seemingly followed bitcoins ups and downs over the past week. One notable altcoin that has been performing quite well is Ethereum (ETH), which is $205 per ETH at press time. On May 30th Ethereum trade volume surpassed BTC markets for the first time in history and currently commands a $19 billion market cap. The third highest market cap held by Ripple (XRP) has taken a significant dive and hasn’t really recovered much as the price hovers around $0.23 cents per XRP.

The fourth highest valued alternative cryptocurrency market NEM retraced a touch and is resting at $0.21 cents per token. Other altcoins have also rebounded since the dip including Ethereum Classic (ETC $17), Litecoin (LTC $25), Dash ($119), Monero (XMR $43), Bytecoin (BCN $0.002) and Stratis (STRAT $4.50). Another coin that has received a bunch of volume is Tether, which currently holds the fifth highest volume as some traders seem to have used the token as a safe haven from the dips.

For now, Bitcoin’s price has appeared to have found a temporary floor and remains relatively stable with a few light swings here and there. Some traders seem pretty confident that a horrible bear market has been avoided, but most traders are still doubtful the downtrend is over. Good news from Russia has seemingly helped push the value of bitcoin upwards. Meanwhile, talks of a scaling compromise has replaced some of the vitriolic energy that has given the bitcoin ‘community’ a bitter taste.

Bear Scenario: It’s possible a second leg downwards could happen in the near future continuing to push the price to lower levels. Bitcoin’s fiat value could dip down to the $1800-1600 range if bulls step away from exhaustion. At the moment looking at order books from popular exchanges shows a strong floor at the $2000 mark for the time being.

Bull Scenario: Bitcoin’s price has jumped back and has shown resilience after last week’s losses. In order to bring the upswing velocity further, it would help if the cryptocurrency crossed over the $2400 range. Breaking this resistance point could bring the digital asset to higher levels and possibly get closer to last week’s top or create a new all-time high.

What do you think about the price of bitcoin retracing to $2250-2300? Do you think bitcoin will continue to rise to higher levels? Or do you expect bears to lower the price further shortly? Let us know in the comments below.

Disclaimer: Bitcoin price articles and markets updates are intended for informational purposes only and should not to be considered as trading advice. Neither Bitcoin.com nor the author is responsible for any losses or gains, as the ultimate decision to conduct a trade is made by the reader. Always remember that only those in possession of the private keys are in control of the “money.”