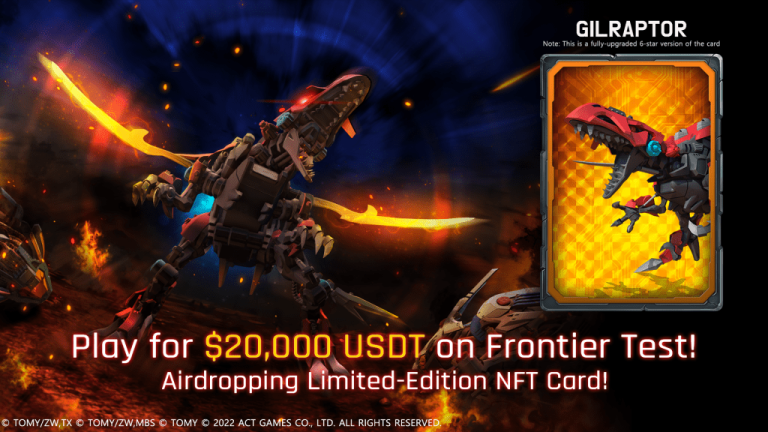 PRESS RELEASE. ZOIDS WILD NFT ARENA, a blockchain trading card game presented by Z SPOT and developed by ACT Games, launches a two-week beta test named Frontier Test today, where players can experience various aspects of the game for free. The Test takes place from November 10th to November 23rd, and players can still signup for the Test throughout the two-week period.

Frontier Test offers the players a full-fledged experience of the game, even offering monetized portions of the game for free. Players will periodically receive a set of new cards through Inbox, which can then be used to form a deck of thirty cards required to play against other players. Players can also upgrade these cards to higher grades by burning through three material cards of the same level and in-game Tokens, which the players will also receive periodically through Inbox. Players can test out the game in English on Android and PC. Players will finally get to experience the fast, dynamic gameplay featuring in-depth strategy involving card combinations, elements that have been scarce in blockchain games.

Frontier Test offers prize money of $20,000 USDT to avid participants that partake and enjoy the game, with the rewards being assigned based on each player’s ranking and the accompanying tier.

Accompanying the Test is ZOIDS WILD NFT ARENA’s second airdrop, which consists of 1,000 limited-edition NFT cards of Gilraptor. One of the conditions for this airdrop involves Frontier Testers leaving meaningful feedback on the game, as well as the usual prerequisites involved in the airdrop.

Z SPOT revealed that the Frontier Test is designed to seek and acquire valuable opinions from the participants to balance the gameplay and prepare for the grand launch.

The “ZOIDS” series encompasses substantial content that TOMY Company, Ltd. has been developing as original intellectual property since 1983. ZOIDS are a biomechanical lifeform themed on dinosaurs and animals, named by combining the two words “zoic” (pertaining to animals or living beings) and “android” (a robot with a human appearance). ZOIDS are Real Moving Kit toys (assembly-type motorized toys) that are equipped with electric motors or wind-up mechanisms and move similarly to a real lifeform once assembled. For the first time in 12 years, efforts to develop “ZOIDS WILD,” the latest ZOIDS series, were initiated in 2018.

Z SPOT PTE. LTD. is a blockchain game publisher founded in 2022 in Singapore, specializing in publishing WEB 3.0 games. In addition, the company is a platform developer for popular Web 3.0 projects, with many more titles on the way.